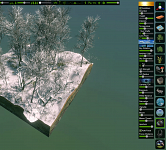 I hope there will be an option to switch off the bobbing; it makes me nauseous after just five minutes of walking around.

There already is, you can disable it under settings.

Thank you, that worked well. Another issue I noted today: There is no way to walk through cobwebs.

Is this part of the fata Morgana update? I thought it was announced yesterday

I hope we have ceilings in our first-person view for great screenshots.

We're getting close to the first Elder Scrolls. Imagine if somehow in a play mode you're walking in a hall enter a room and a 3d model of a Lich appears, roll for initiative

Merged with: First Person view? Along with friends?

Throw in some VR support and being able to invite friends would be WAY cool as well. Imagine RP or playing DnD sessions "in person"

No idea how to delete things

Also, it allows you to capture excellent screenshots for your players. In this first-person view, it would be awesome if you could toggle a switch to only show player view.

it would be awesome to be able to view things in first person view. to show a whole room but not parts of the map other players haven't found yet

yes please! a camera mode type of view would be extremely useful.

First person seems a bit of a waist. This program seems to be intended to work with an external program like VTT. Since that is the case would it not be better to put the time into things like assets and room types rather than first person view? Their are vary few ways to use it as I understand unless you are planning to make your program stand alone later.

FPV is for taking screenshots of the rooms, the items on the walls, contents of shelves, etc. to present to the players while they are in the room - otherwise some of the elements of the 3D models is slightly lost. :)

Based on the dev's comments during the beta the functionality basically already existed and just needed to be made fully functional - its not taking up massive amounts of time away from other areas of the program.

Also the programming and modelling sides are done by two different devs, so its not actually stopping Wim making more assets if Karel is adding FPV.

I mean, you can make close ups on things you want your players to pay more mind to. Even though it's build so you can add them to stuff like VTT there's no reason why it can't do different things for different people who may not use those programs. Good thought though.

If we're going to be able to move anywhere in the map and point at any angle to take a picture (which is what I hope this will be) then we also need a way to move in smaller increments or more easily than using the mouse. Some sort of "toggle movement keys" that lets you move by pixels (or some other small unit) to get just the right location would be perfect.

brilliant ideas! cant wait for it to incorporate token stamps for player tracking and live play! gonna be awesome!

For the actual walk through option, can we have an option to prevent peeking over the walls so I can walk through for the players and they can't see the whole dungeon?

Interesting to see we have so many other vote posts involving third person view or lower camera angles.

If you can point out duplicates we've missed, we'll merge them together. :)

I do not see mine or the others anymore but those posts were about camera angle not so much moving through the space. A bit of a different topic so they should not have been combined.

very curious what this feature will entail / how it can be used! Aerynus, is there anything you can share at this stage?

I can think of a great one! Have a laptop at your game night for DM (If playing on a printed map) and literally walk your party through the room!

Taking screenshots of the rooms, the items on the walls, contents of shelves, etc. to present to the players while they are in the room - otherwise some of the elements of the 3D models is slightly lost. :)

Merged with: Player walk through

This might be a bit much, but a multi player feature where players can just log in and walk around would be amazing. Nothing else, just able to walk around, maybe open doors. Even if it's just a fp camera.

Add a camera mode to make easier take pictures from a scene.

Flowscape/Talespire and lots of games have this feature. You can change the position of the view easily and then take a picture. You can move the view to positions which aren't allowed in normal use.

Add filters is cool, but the camera mode should be priority.

A important feature is also remove the surroudings from the picture. 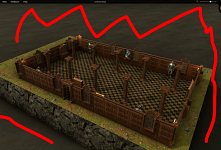 Status changed to: In progress